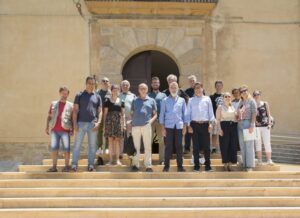 The first GRAPE Social Economy Mission took place in Sicily in the Municipality of Mirabella Imbaccari from the 13th to the 15th of July 2022. In this occasion, partners had the chance to meet in person and start sharing experiences and skills. The Mission pivoted around some key objectives: the introduction of the partners communities with their own strengths and weaknesses, the identification of shared priorities for the green and digital transition in each community, the sharing of existing or designed good practices, the evaluation of synergies and replicability conditions of the proposed initiatives and finally the introduction to the first elements for the construction of a local Action Plan.

The two days of meetings were preceded by the elaboration and sharing of documents and materials describing each community, so as to facilitate confrontations. Specifically, introductory documents included a general description of each context and its socio-economic dynamics, the state of the art with respect to local initiatives for the transformation in terms of sustainability of each community and an analysis of their internal and external strengths and weaknesses.

The first day was dedicated to the partners’ and respective contexts’ presentation, providing then a clear map of common elements among the different territories. This activity has allowed to find the important shared priorities: protection and promotion of local heritage, efficient and sustainable use of resources, healthy and sustainable agro-food system. A fourth priority, connected to the topic “just and fair transition”, has been identified as a cross-priority: each initiative will have to take into account its social impact so as to leave no-one behind, especially most vulerable subjects. In this respect, the involvement of social economy is even more crucial in order to guarantee such result.

The second day started with a technical session on how to draft a Local Action Plans for social and environmental resilience, with the introduction of some key elements for their design. The evening has been dedicated to the tour of local good practices, with a showcase of five local enterprises from the digital and the agro-food sectors. It has proved useful in order to learn directly from local players about challenges and opportunities for a transition towards sustainability.

The Mission ended with an public meeting, open to the whole community of Mirabella Imbaccari, during which the project goals and expected achievements have been explained.

Sifnos, in the Cycladic archipelago, hosted GRAPE second Social Economy Mission. The sharing of good practices in Sifnos and a deeper analysis of partners’ initiatives and projects concerning protection and promotion of local heritage, efficient and sustainable use of resources, healthy and sustainable agro-food system were the goals of this meeting, held from the 20th to the 24th of September. The work for the local Action Plans elaboration further developed.

In the first day, partners were engaged in one-to-one meetings, organised in order to allow every local partnership to catch up individually with the other local partnerships and discuss the chances for the replicability of the various practices proposed. Exchanges among partners with similar priorities were particularly significant. Some very interesting initiatives emerged during these meetings, we describe some of them. 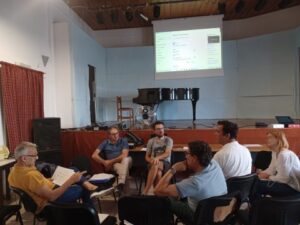 Concerning the priority “protection and promotion of local heritage”, the Community Foundation of Messina and the Municipality of Mirabella Imbaccari shared the process that led to the regeneration and re-functionalisation of the historical building Palazzo Biscari, which is now a sustainable development hub for the territory. Trying to devise solutions for a healthy and sustainable agro-food system, the Municipality of Malegno started the recovery of today abandoned lands once cultivated with vines, in order to protect the soil from hydrogeological instability and promote social economy with the involvement of a farming cooperative which shall cultivate olives and grapes.

The Municipality of Bonares has introduced its long-term plan for sustainable mobility aimed at reducing pollution and consumption of fossil fuels. Concerning the most vulnerable groups, the Municipality devised a one-year plan to foster employment that uses social aspects as evaluation criteria for candidates, thus favouring subjects more in difficulty.

Concerning the pillar “efficient and sustainable use of resources”, the Municipalities of Mirabella Imbccari, Bonares and Malegno have showcased their experiences aimed at making the public sector greener and more efficient. Solar panels were installed on buildings owned by the public authority so as to increase energy self-production (Mirabella, Bonares); such buildings were recovered to ensure a higher energy efficiency using sheep wool, otherwise disposed as waste (Malegno); LED technology was used for public lightning for a higher efficiency and a lower consumption (Bonares).

The Municipality of Sifnos shared with the other partners its plan for the protection of dry stone-walls, an activity fulfilling both the priority of protection and promotion of local heritage and the priority of efficient use of natural resources. Furthermore, the problem of overtourism was discussed, highlighting the negative impact of an anthropic pressure that may destroy the island itself if not accompanied by an aware and respectful use of resources.

During the first day of the meeting a workshop was held focusing on the sustainable management of natural resources; such workshop involved the community and several representatives of local civil society organizations.

The second day was dedicated to the explanation of the main phases in the drafting of a Local Action Plan: defining a “benchmark” (i.e., what, in theory can be achieved); identifying local inhabitants’ needs (stakeholders); definition of a consolidated benchmark (obtained combining the previous steps); participative planning of the actions to take; drafting a local strategic plan.

Each partner gave a contribution in suggesting different kind of actions that should be locally implemented to make the single passages operational: such suggestions will be formalised during the third Mission in Bonares. The Mission ended with a tour in the Faros village, where the partners visited some of the experiences of natural resources’ management discussed during the first-day workshop. 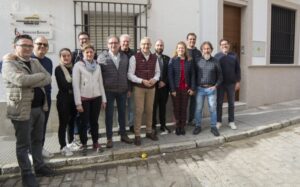 The third and last GRAPE Social Economy Mission was held in November 2022 in Bonares, a community with circa 6000 inhabitants in Andalusia, Spain.

The work focused on the process that all partners will follow during the next 5 months in order to draft four Local Action Plans, one for each territory involved.

The specific phases of such process were explained and analysed during the first and second day morning sessions. Specifically: analysis of each and every contexts involved and a first long-term hypothesis concerning social and environmental transition at the local level; an inquiry concerning potential legislative constraints and potential financial resources that may allow the Municipalities to implement their vision; mapping and involvement of the main local stakeholders to share vision and ideas; identification of intervention priorities in the light of the needs emerged from the dialogue with the community and the necessary feasibility analyses. The last step consists in the drafting of the Local Action Plan, the document collecting and summarizing the outcomes of the above-mentioned phases.

The implementation of this process, adjusted to the specific contexts of each partner’s community, will allow to gather and compare the experiences in the different territories and also ease the further development of an online instrument that may support other interested communities in replicating the process, providing them with insights and examples.

The Mission allowed the partners to get in touch with the Bonares territory and its specific characteristics.

One of the aspects that most struck the participants was the cooperative spirit characterising the whole local community and that gave life to several cooperatives now active in many economic sectors (agriculture, transports, education). A specific insight has been dedicated to the experience of COOPINTE. COOPINTE is a second-level cooperative with more than 20 years of experience: it was founded by the Bonares Municipality together with other local organizations to support the activities of its members and therefore engender local responsible development.

During the second day of the Mission the perspective was enlarged to the regional level thanks to the intervention of local representatives from FAECTA, the network of Andalusian cooperatives and partner of the GRAPE project. They showed how deeply the cooperation sector is rooted the Andalusian region, thus being among the most developed cooperative sector at national level.

The principles inspiring cooperative enterprises can be summarized as follows: priority to people rather than to economic profit, social and environmental responsibility, engagement in community development. Such principles have been described during the tour to some of the cooperative examples of the territory.

The cooperative spirit arises in all sectors of social life, not only in the entrepreneurial context :  the meeting with some of the representatives of civil society organizations and the experience of some local cultural traditions showed the high level of cooperation and cohesion that characterize the local community in its entirety.

The partners, moving from the experiences gathered in the different territorial contexts and from the relation established among themselves, will go back to their own communities and, together with the Municipalities and social economy organizations, delve in the development of participatory processes that will end in the drafting of Local Action Plans for social and ecological transition.